How long will G B News last?

Former BBC presenters often switch sides to make a better pension for themselves, so the best of luck former sacked Sunday newspaper editor Mr Neil, to archaeologist Mr Oliver, and convincing teleprompter reader Mr McCoy for making the best of last of the television summer wine. 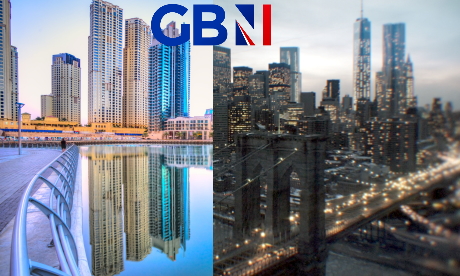 It is unlikely to last awfully long.

It seems unlikely for GB News to last be long-running service because although £60 million sounds like an awful lot of money, but it has not bought a place anywhere near the top of the TV menu.  ITN runs the news for ITV/STV, Channel 4 and Channel 5 on £136 million a year and that does not include a 24/7 news-only broadcast channel, only three hours a night.    BBC News’s various outputs (BBC News channel, BBC World News, BBC regional news) costs many hundreds of millions of pounds a year to run.

According to City AM £20m of the money for “G B News” came from US media giant Discovery, Inc. based in New York. The remainder is from Dubai-based investment firm Legatum and hedge fund manager Sir Paul Marshall:  perhaps it should be called “Dubai Discovery-Inc News”?

It has somewhat limited coverage.

The channel will be broadcast on Freeview multiplex com6.  This means less than three quarters of homes will be able to even receive the Freeview signal. (Multiplex COM6 - ARQB - Arqiva B: broadcasting to 19.8m UK homes from 80 masts ).   This means that the of the 44% of homes that use Freeview, only three quarters of them will be able to watch the new channel, makes 32.9% of homes.

In total no more than 66.8% of homes will be capable of watching. 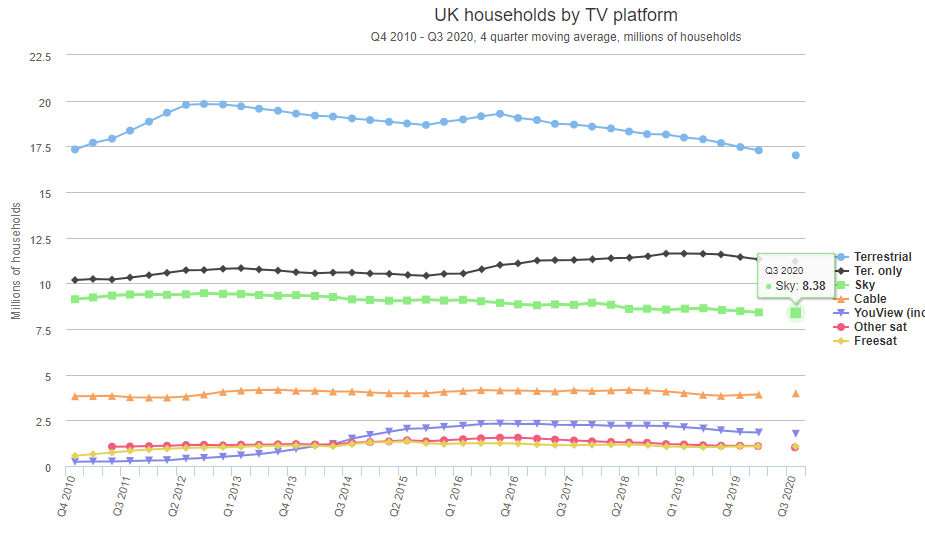 It is as far down the programme guide as you can go.

The rules also say that without broadcasting anything for at last two hours a day the slot is lost.   But any spaces vacated this way caused a shuffle of the channel numbers to make the free slot at the end (in the 90s on Freeview).  Each broadcaster can shuffle around their own channel allocations, so UKTV can move Dave, Drama, and Yesterday, but the slots cannot be sold off.

This means that Freeview channel 236 is literally 118 presses of channel down from the old home of Mr Neil and Mr Oliver.    Fans of Mr McCoy will find him only 20 channels down, but no longer in High Definition.   This is important because time and again viewers still trust what is on the single-digit Freeview channels and do not seek out the same people when they jump ship.   The remaining British viewers of broadcast TV do not really watch news shows after 7pm and before 10pm: there are such shows on at 8pm on ITV+1, BBC FOUR and 9pm on BBC Scotland and they not watched by many homes.   People expect their peak time TV to entertain!

Andrew Neil’s BBC shows have been for described as for “bored students and housewives” and “insomniacs”.

The Disney corporation “closed 30 channels in fiscal year 2020. We plan to close 100 in 2021”.   With the rise and rise of Netflix, Disney+ and Amazon Prime Video most media organizations are removing content from broadcast television, because most people want to watch stuff when they want to!

Clearly the people putting up the £60 million for this TV channel do not spend much time in the United Kingdom because they would realise that every schoolchild can tell you that “Great Britain” is the name of the biggest island in the British Isles archipelago, ahead of the Island of Island.  The next most populated are Portsea Island, Isle of Wight, Anglesey, Isle of Sheppey and so forth.

Perhaps if the backers did not all live between 5,592 and 6,441 km away from our fair isles, they might get that!

It also appears that the schedule and budget for the channel are not going to be able to run to collecting much news.  Based in single location in Paddington in London, it seems unlikely to match the reach of ITN (with their Border, Tyne Tees, Calendar, Granada, Central, Anglia, London, Meridian, Wales, West Country, Channel, UTV news commitments) and clearly no match for the well-funded BBC news operation that still runs from 14 locations in England: London, Nottingham, Norwich, Cambridge, Manchester, Newcastle, Oxford, Tunbridge Wells, Southampton, Plymouth, Birmingham, Bristol, Leeds, Hull, plus Wales, Scotland, Northern Ireland, St Helier as well as BBC World News, BBC News America, BBC Arabic and BBC Persian.

Hiring lots of people to sit in Paddington who shown skill has been to be the face for a skilled, reputable, and well-oiled news machine are going to struggle without having news to read from the teleprompter.    Even with the best technology, the best communications networks, and the best people almost every 24/7 news channel has taken many years to get it together: Sky News, BBC News 24, BBC World Service News TV, and Sky Sports News Dot Com TV all were quite embarrassing for many years.    Presenters such as Mr Neil have been fronting 45-minute shows, not 168 hours of TV output every week.

A history of failure of TV News channels

Most TV news channels have been and gone.   ITN News/ITV News lasted from August 2000 until Christmas 2005 but never managed to sell enough adverts to make it a financially viable prospect.

Sky News is kept on air by the subscriptions that people take out with Sky generally being used to fund a goodwill brand ambassador for Sky.    Of course, Mr Neil was involved with the early days of Sky News but was ousted when Sky Television merged with former rival British Satellite Broadcasting because his public statements were not suitable for the new merged company BSkyB, which perhaps means he is still “taunting” as much as he always was!

And Mr Neil was also the editor of the Sunday Times (whilst “editing” Sky News) before moving onto being on the BBC Two every weekday, and Sundays and Thursday late night on BBC One.  The idea that Mr Neil is anything of an outsider is perhaps fanciful.

But no-one has managed to launch an independent new TV News channel for many years because even well thought out channels like The Money Channel, which at last had a target for adverts in mind, burnt though their cash before making a profit.

The no Paul Dacre problem

Another problem here for “Dubai- Discovery News” is that (surely) part of the plan was for former newspaper editor (and current multimillionaire) has failed to demonstrate that he could perform the legal duties required as a head of Ofcom and will not be therefore there to be able to turn a blind eye to the legal protections that are required of a broadcast TV channel by the law.

Remember here that it is the multiplex operator (Arqiva) that will be unable to broadcast the channel if Ofcom says it is not 100% squeaky clean and as they transmit almost everything in the UK, they will comply with an Ofcom directive or just be totally unable to operate their business.


All questions
[][][
In this section
Comments
G
Great British Tripe
3:05 PM
Well, I thought it might possibly be useful, but ..

This channel is clearly an attempt to cash in on the people who voted brexit - but they just don't get it - that vote was a total rejection of thatcher and blair, - and the consequent destruction of peoples lives and livelihoods by the money men, the ruination of manufacturing capability and thus, self sufficiency.

Totally agree on self sufficiency, maybe too much is imported from the EU.

Chris.SE's 3,285 posts
C
Craig
12:12 PM
I would have thought if people want to listen to people talking about news then they tune into either BBC Radio 5 Live, LBC, Talk Radio or Times Radio.

People turn into news channels to catchup on the news, not to see what people's views are on the latest news.

Craig's 7 posts
M
Mike
sentiment_satisfiedBronze
3:00 PM
*Tripe" is a much used word by the people that write it.

Which is presumably why that person chose it as part of their GB"Tripe" posting handle :D

Chris.SE's 3,285 posts
D
Darren White
2:37 PM
The best news channel in Britain, we have now stopped watching BBC, ITV, Channel 4 or Sky. Every friend and family member I am showing the channel to are also commenting similar and are refreshed that there is now a credible alternative. Well done and keep up the good work

Darren White's 3 posts
W
Willie Bone
sentiment_satisfiedBronze
8:46 PM
Thornhill
Digital tv and radio have enough carriage capacity to deliver all sorts of services, so good luck to new starters like Times Radio and GB News.
GB News has suffered a lot of flack about its output and has been pigeon-holed by some commentators as a hate propaganda station. Admittedly, I am not personally impressed with the former, but definitely don't agree with the latter!
The GB News perspective on life is no more harmful than reading agenda leading titles like The Daily Mail, The Daily Express or even The Morning Star. That stated, GB News programme output is not very exciting and is a reminder that good television doesn't come cheap!


Willie Bone's 55 posts
N
Nick Anderson
sentiment_satisfiedSilver
8:07 AM
In a country such as the UK and indeed now in most of the world the number of TV and radio stations have now reached saturation level so it is definitely in the media world the survival of the fittest.

Nick Anderson's 126 posts
W
Willie Bone
sentiment_satisfiedBronze
5:05 AM
Nick Anderson, You are correct about the survival of the fittest on today's supermarket telly and radio choice, but the fittest might not necessarily be the best! Early days seen the death knell of the ITN News Channel (on tv and DAB), Tara TV (UK access to some RTE programmes from Ireland) and S2/STV2 in Scotland. Radio's lost services included OneWord (book reading and drama), Primetime Radio (from Saga), Saga Radio (regional service) and not forgetting Independent Local Radio output on commercial radio.
So, some diamonds amongst the dross were lost on services once received on tv and radio.

Quite. Diamonds such as GWR in the West region!