Bent televisions screens is what I am on about this month; that is right curved screens - another 3D fad or something with more lasting appeal? 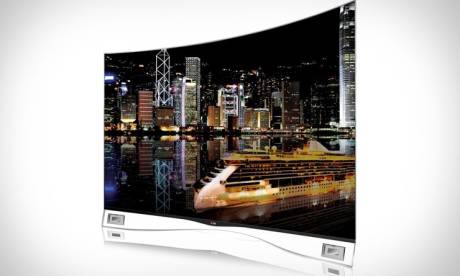 We will be seeing more curved large screen televisions hit the shops over the next few years as, according to scientists, we seem to like them. It may seem a bit counter-intuitive (possibly because we are so used to a flat image for the last 50 years?) but a curved screen on a large scale may actually make sense; flat screen CRT technologies required corrections to the edges (remember S correction anyone?), and with extremely large flat screen images, without corrective processing, we may also perceive distortions towards the edges. A curved screen may go some way towards reducing this distortion and may create less reflection allowing the screen to be dimmer, extending the life of the display and reducing power consumption. Sounds reasonable. Organic LED (OLED) technology is also pushing this as this type of manufacturing allows flexible screens to be readily produced; albeit more expensively than conventional LED tech.

That is the practical case in a nutshell, but the neuroscientists have also been looking at this with their functional magnetic resonance imaging machines rigged up to the brains of human lab rats and what they have found is intriguing also; evidence suggests that as human beings, we like rounded, softer objects and images rather than hard, straight lines. Neuroaesthetics is the word (you read it here first? well almost - New Scientist actually) and it represents the neurological basis for our appreciation of beauty; curves stimulate pleasure areas of our brain, whilst angles stimulated areas that detect threats; it is amazing what they can do with a few wires stuck down with Gaffa tape on your head. Guess what, experiments indicate that curved television screens are more pleasing than flat ones - that will please television manufacturers too I am sure...

But I sort of get it? No really? I like rounded objects (the number 8 is my favourite number) and it may be that these techno boffins (television manufacturers and neuroscientists alike) may be onto something. Even smartphone manufacturers are latching onto this which can only be supported by the aesthetic argument as distortions to the image on a small flat screen are imperceptible; there is no real practical reason for a small, curved screen. There are plenty of rumours that the Apple iPhone 6 will have a curved screen though, so if Apple is going to employ it, there must be something in it.

I suppose that the ultimate neuroscientific test to determine whether we like curves over angles is whether we will preferentially buy these products and we will be finding this out over the next two or three years; curved screen television shipments this year will be in the region of 800k units but predicted to be more than 6m by 2017.

Coupled with UHD technology we could be in for some very curious developments; 360 degree fully immersive 8k television anyone??? Imagine that!


Help with TV/radio stations?
[][][
In this section
Comments
Ian
sentiment_satisfiedGold
2:03 PM
These make me feel sick,

Ian's 497 posts
M
MikeB
sentiment_very_satisfiedPlatinum
6:59 PM
Our Samsung rep has some lines about how the curve improves depth perception, and improves viewing angle, etc. Frankly, we are slightly dubious, and so was a lady customer on Sat., who said she wasn't keen (unlike her husband). However, she did mention that her room layout did mean people did have to look at the screen from relatively wide angles, and I pointed out that the improved angle of viewing was supposed to be a virtue of the curved design.

She tried it out, and totally agreed! It did make a difference, and its highly likely they will buy one. So the curve does have its uses.

I suspect that TV's are now curved, because they can be, and certainly one or two people have bought curved TV's because they are a) different, and b) because the equivalent flat screen last year was actually more expensive.

MikeB's 2,579 posts
Mark A
sentiment_satisfiedGold
8:31 PM
I am still waiting for the 360' screen. With a display in the ceiling and floor as well.
I will call it bubble TV.

rob's 1 post
C
Chris Hewson
10:45 PM
I've looked at both flat and curved screens in the local TV outlets and I'm disappointed with the overall bent results. Watching 4K (and why would you consider anything else if spending that kind of money on a 50" - 65" set) I struggled to see any real difference when viewing from 6 - 8 feet. What I did find irritating on the bender's was the significant increase of room reflections made even worse if viewed from one side, so much for the reduced reflection's claim! So we are back to the days when closing the curtains and just using low wattage table lamps was the norm to achieve a watchable decent picture, only now in order to watch an outstanding image without the room contents and family members playing a passive 'on screen' roll! Curved screens do not float my boat in any way. When I look at the large brick wall of my house from any angle it still seems strangely 'FLAT' So for me it's a definite no thanks. I'll stick out for a decent size FLAT OLED 4K when that one clever individual on the planet cracks the low yield issues!!

Chris Hewson's 2 posts
A
alan ripley
11:24 PM
The which report said they offered no advantage & considered the larger flat screens to be better,I checked them out inCurrys & they looked really good to me so will probably get one when my current set fails

Flat screens now, are not CRT technology scanned from a point behind the screen so linearity is almost perfect and there is nothing a curve would make any difference except the single sweet spot' as described above.

No doubt there will be more sales blurb like Samsung's that will extol the virtues and it will be a must have' in the modern home?

DaveCheltenham's 35 posts
J
John Martin
sentiment_satisfiedSilver
9:36 AM
Come on folks only reason this has come out. The young update their phones every year The sale of normal HD is sliding so lets hit them with something new. 3d is not as good as they said so curved screen larger numbers for their screen must have. Nothing wrong with their old one but got to have. Next year something newer and the game go's on