To ensure that there is a full history of analogue television here on UK Free TV, a new interactive map showing the transmitters used for 405-line TV has been added. 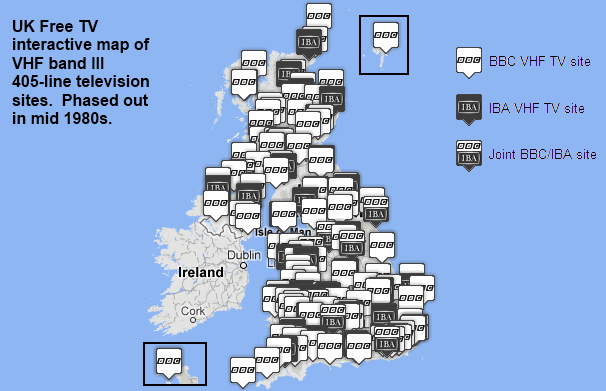 You can hover over each location to see the BBC or IBA region, the channel used and the power level.

Help with Freeview, aerials?
[][][
In this section
Comments
Mark Agius
sentiment_satisfiedGold
2:23 PM
On your mapsofvhf.php page you could also add a list of the VHF transmitters so visitors can click on the transmitter name as well as the map to visit a page.
Also next to the names have the channel number, power, vertical horizontal etc. in a table.
EG.
Name, Station, Location, Channel, V/H, Power
Crystal Palace, BBC London & South East, TQ 339712, 1, V, 200kW
Croydon, TQ IBA Theams / LWT, 332696, 9, V, 400-kW

Didn't think you were old enough to be aware of it's existence. Brilliant.

When ITV came along my Dad bought a converter "Set Top Box" (painted in brown Hammerite) which took the ITV signal and converted it to Auntie's frequency so that our Sobel could cope. Technology in the making !!

Roy in Eastbourne's 6 posts
A
Alan
sentiment_satisfiedBronze
7:02 PM
Roy. I'm from Eastbourne to and can remember a TV engineer who lived in Rosebery Avenue, who built a scaffold mast on the side of his house so he could receive southern from Dover.

Briantist's 38,844 posts
Briantist
sentiment_very_satisfiedOwner
7:51 PM
Roy in Eastbourne: I remember we had a black-and-white TV set that supported both 405 and 625 lines.

I do recall turning the "on switch" the wrong way and it broke off in my hands.. and you could see mysterious wires if you looked though the hole.


Ron Lake's 73 posts
N
Nigel
sentiment_satisfiedBronze
10:31 PM
Malton
Can you check Belmount TX as on overview map shows as BBC but changes to IBA when I zoom in ?

Nigel's 54 posts
Briantist
sentiment_very_satisfiedOwner
9:36 AM
Nigel: Thanks .. Belmont was a joint site, but the import had a tiny difference in the locations for BBC and IBA... I have fixed it now.