BBC regions and nations - some notes

The BBC call three parts of the UK "nations": the country of Scotland, the principality of Wales and province of Northern Ireland.

In these "nations" the BBC provides single special versions of the first two television channels. Only in Scotland does this differ from the channel 3 network, where Scotland is broken down into three segments by STV, and the ITV Border covers the south of the country.

In the "nations" there are substantial changes from the "network" versions of BBC One and BBC Two, including special programmes during peak hours, time shifted schedule slots for network programmes and local presentation. 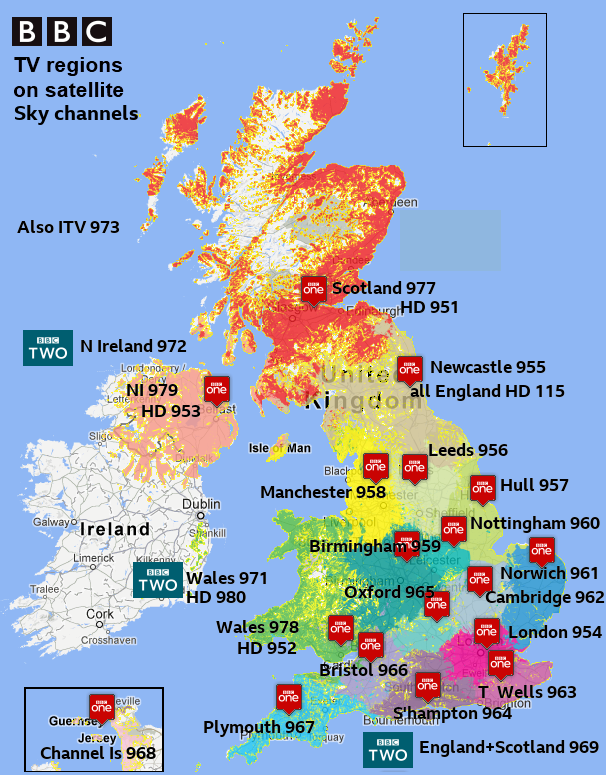 it is now exceptional for there to be BBC regional programmes, aside from the local news and sport programmes. The BBC English regions follow the same transmitter regions as ITV1, with the major exception that the BBC Newcastle also covers the ITV1 TTTV and Border England areas.

Both the BBC and ITV provide all the English regions on satellite, and to do this it is necessary to broadcast each region as a separate channel. For this reason, the BBC has collapsed BBC Two to a single English region for all digital platforms.

Due to the nature of the digital multiplexing system used for Freeview, BBC TWO English regions were never implemented on the terrestrial system, and have never been made available to the "cable headends".

Until switchover is complete, the BBC still has the ability to run the pre-digital era English regions on the analogue network. This means the newest regions collapse on BBC Two to their historic parent so BBC Oxford shows the Southampton service, BBC Cambridge shows the Norwich programme and BBC Hull has the Leeds feed.

The BBC Channel Islands service is an opt-out from BBC Plymouth, this differs from channel 3 where ITV1 Channels Islands is a Meridian opt-out.

Emergency opt-outs on BBC TWO The consequence of the above means that on the rare occasions that regional news cannot be shown as normal on BBC One - such as a national sporting even overrunning - the follow happens:

Emergency BBC service on BBC One

As mentioned above, the BBC regions are opt-outs from the "network" or "sustaining national service".

Rather than showing a blank screen, the BBC has a number of backup systems that will use an alternative feed.

When this happens, the BBC London service is seen (the only rare exception to this is a failure of BBC London which brings in the service from BBC Southampton).

As a consumer, of course, you can switch your Sky or Freesat receiver to pull in any BBC region from the Astra 1N satellite service.

However, DVB-S digital satellite service is not compatible with the backup system used for the terrestrial analogue and Freeview network.

The national (or network BBC channels) are provided as a single digital multiplex and are not de-muxed and re-muxed when the signal is re-transmitted locally in the event of terrestrial signal loss.

All of the BBC channels are statically multiplexed ("statmuxed") on a region-by-region basis as these devices are costly to provide.

If the BBC were to support a complete backup multiplex for each region (thus allowing a TV signal to continue without retune or drop-out), that would mean 16 complete new satellite transponders which would cost a huge amount of money for a service that would not be used outside times of exceptional failure.

Alternatively, the BBC could take a regional feed from the feeds on Astra 1N and rebuild the multiplex for each region (and relays) but this would require de-muxing and re-muxing equipment in around over 1000 transmitters, which would also be highly expensive and difficult to manage.


Help with TV/radio stations?
[][][
In this section
Comments
P
Phil Blair
9:07 AM
York
My broken M&S tv was replaced under guarantee for a broken integrated dvd on 12/2/11. The old tv had a full range of digital stations when taken away (31/01/11) but cannot now pick up any.
The TV tech people tell me that this is due to transmitter change over work that is leaving the digitalsignal too weak for reception though the analogue is OK (My aerial is directed at Emley Moor though I'm right on the border for Bilsdale).
When can I expect to get normal service back please? thanks Phil

Phil Blair's 1 post
Briantist
sentiment_very_satisfiedOwner
9:52 AM
Phil Blair: Please contact M&S and ask them to provide you with a working set. There has been no chances to the broadcasts since 12/2/11.

Briantist's 38,844 posts
Mark A.
sentiment_satisfiedGold
11:31 AM
Good read, never knew about BBC Southampton being the backup to BBC London.
Are you going to add a "ITV and Channel4/S4C regions and nations" page?
If you do, you may want to include the satellite service frequencies etc or a link to http://www.lyngsat.com
as only the local ITV region and ITV London are listed in the EPG. (RH163LB)

I might do some more work on them to link into Lyngsat. The search box on ukfree.tv also searches Lyngsat.

Briantist's 38,844 posts
G
Geoff
8:05 PM
Is there any reduction in the signal on channel 52 BBC channels seem to be a lot weaker than all the others

Geoff's 1 post
Briantist
sentiment_very_satisfiedOwner
9:46 PM
Geoff: No, there isn't, as a general rule. You have not given very much to go on really. See Single frequency interference | ukfree.tv - independent free digital TV advice .

Briantist's 38,844 posts
A
Alex Gumbrecht
11:12 AM
Farnborough
I'm in North Hants and registered for the Switchover Help Scheme. But after the Hannington switch-over the installer visited and said that the signal from Hannington was too weak to use (local Freeview blind-spot). I was advised to keep using my present aerial pointed at Crystal Palace, and to re-check Hannington signal strength after Crystal Palace completion on 18th April. For practical reasons Freesat is not an option for me.

Alex Gumbrecht's 3 posts
Dave Lindsay
sentiment_very_satisfiedPlatinum
11:34 AM
Alex Gumbrecht: Until 18th April Hannington's SDN (ITV3 etc) on C41 and ArqB (Yesterday etc) on C47 are on low power (particularly low in your direction) so as to protect against interference with Guildford transmitter which uses the same channels and which relinquishes them at final switchover on 18th.

If you prefer Hannington, then I would point the aerial at it and attempt retune.

By the way, due to the channel allocations for those two transmitters, you should be able to get one and not the other during the scan. To get CP and not Hannington, unplug the aerial lead when the scan gets to 30%. And to get Hannington and not CP start the scan with the aerial unplugged and plug in at 30%.

If you are testing each for signal strength, then the aerial should be facing the one you are tuned to.