It was first expect that ITV1+1 would come to Freeview during the 30 September 2009 Freeview retune, but this did not happen due to last minute rights issues.

When ITV plc, which runs the official channel 3 services in England and Wales, was created from the merger of two companies, Carlton and Granada, the Competition Commission imposed conditions, which are called the Contract Contracts Rights Renewal (CRR) remedy.

Almost all the other channels that have "+1" time shift channels are single national broadcasts. It is straightforward to create ITV2+1, for example. The output of the channel is fed into a "black box" that re-outputs the content an hour later, and used for a national broadcast.

As the streams for UTV+1, and STV+1 are now on satellite, we can be confident that the ITV+1 service will run throughout the UK. 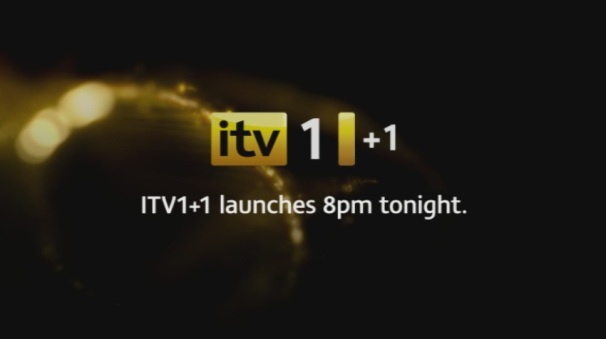 It was a little more complicated for Channel 4. This commercial channel has no local or regional editorial content, but does have six regions for advertising: London, Southern England+Wales, Midlands, North England, Scotland, Northern Ireland. 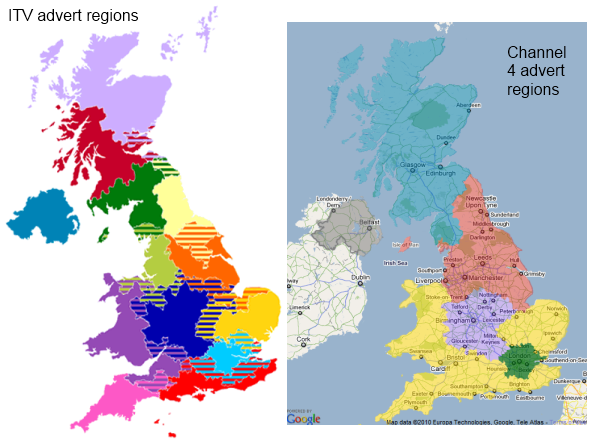 To create Channel 4+1, the corporation needed to use six "black box" devices, to ensure the correct advertisements are seen.

Back at channel 3, the ITV1 channel has many advert regions. STV, which runs the channel in Scotland, divides into four:


This requires, for each region, a separate "black box". These "black box" devices must feed the hour-delay signal back into Multiplex 2 (also known as multiplex PSB2) as only this multiplex has the correct regions.

As the public service transmitters carry only the PSB1, PSB2 and PSB3 (HD) multiplexes, this means that ITV1+1 will be carried to all UK homes, and ITV2+1 will only be available to those with the full Freeview service. 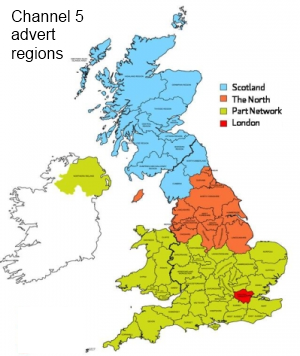 So, what of FIVE+1? The channel has four advert regions: Scotland, Northern England, London and "Network". However, there is no space on multiplex 2 (PSB2) for such a channel, and no other multiplex has the correct divisions.

Help with TV/radio stations?
[][][
In this section
Comments
B
Britts
5:49 AM
ITV Chimps, Need to Learn what a Change Management process is. I have just sent the below to ITV.

I have contacted UK Digital about this, who is firmly passing the blame onto you now. Several weeks prior to the change ITV3 had intermittent signal problems, then after the retune on the 11th Jan, lost film 4/yesterday, ITV3 Remained the same, lost itv2+1, plus many others. I understand from your site that you are now blaming the Atmosphere (although it all worked fine prior).

"If a change management process was followed prior to the change being authorised, then the Atmosphere should have been part of this process. When making Changes to the Transmitters/Wireless signals or any live equipment, it is standard practice to follow a change process and should the change not be successful then a rollout plan is always part of a good change process. At the moment 99.9% of Bristol's population, that use the free Digital service, have been saverly affected by the change which you company made on the 11th Jan to the Mendip Transmitter. It would not have been so bad if the change you made only affected your channel's, and not other providers channels. I wonder how those other companies feel that your company has affected their service. Really the Change Management process is a simple procedure. Given all this I feel that ITV should Pay for TV Licences of all those affected until this is resolved."

I now have ITV1+1 on my freeview service but I am wondering what I have lost in it's place, or were they able to squeeze another channel in?

I find +1 channels are usefull, but where you have "Freeview Light" I would rather have more channels than +1 channels.

Andrew's 5 posts
P
Pete
sentiment_satisfiedGold
6:01 PM
Andrew you have lost ITV2 + 1 so I wouldn't loose too much sleep over it. I just wish all the logos would disappear from all channels as the +1 channel logos in particular as they take up half the top left hand side of the screen and are really distracting, especially during dark moody scenes in a drama. We are not stupid and have info buttons on our remotes to remind us, if by some small chance, we are stupid.

Why does every news and sports programme have a PRESS RED or SPORTS RED button logo throughout its duration on Freeview when we all know that the interactive crap, which very few us bother with, is on Ch 301. Why not just treat 301 as a separate channel with its own listings. I tune in to news and sport to watch news and sport not a PRESS RED button !!! I know I can press GREEN to get rid of it but not if I record remotely and its a real pain anyway every time the news is on. Luckily Newsnight viwers are not troubled at the moment anyway.

Thanks for that, explains why I could not remember what I had lost.

I understand why they have the +1 logo, but it need not be so big.

I just would rather have more channels than hour on repeats, 2 channels wasted.

I'm with you all the way on the red button thing too, why not just have a seperate channel.

Andrew's 5 posts
S
Sam
2:48 PM
Any word on ITV1 HD being added to the Northern Ireland Sky EPG? This is a pain in the arse talking customers through the 'other chanels' function.

Sam's 9 posts
Briantist
sentiment_very_satisfiedOwner
7:45 AM
Sam: I can only assume this is waiting for UTV to sort out an HD service.

Briantist's 38,844 posts
P
Paul
7:51 PM
Holsworthy
I now have ITV+1 on channel 33 Freeview, I receive my signal from Caradon Hill. I notice at programme junctions the ITV Wales logo, at at 1900 hrs I was hoping to see The Westcountry Tonight but alas I get Wales Today. Is there any good reason that Caradon Hill is fed from Wales? I cannot receive any welsh txs from my location and I know that I am still on the correct ch/mux for Caradon by the way.

Paul's 14 posts
Briantist
sentiment_very_satisfiedOwner
7:52 PM
Paul: And I thought people in Wales were saying they got ITV West on ITV1+1...

Briantist's 38,844 posts
G
Gordon
9:31 PM
Perth
Just rescanned my freeview box, had multiplex D for the first time and STV+1. Then multiplex D have disappeared although I still have STV+1. My signal comes from Craigkelly for my postcode PH2 9NL. Any ideas as to why I had the extra channels then lost them.